ArmA Scripting Tutorials: How To Make A Wreck

…or more precisely, how to make wreck on demand without fire and smoke. Actually clean wreck making works only on cars due to tanks and helicopters having effects scripts attached to them I cannot get rid off. For example helicopter will explode no matter what (really, really annoying actually) and tanks will have some secondary explosions happening for a bit then stop, also scripted. While this might not be good for immediate wreck creation, it would probably be OK at mission start.

As you can see from the video, cars are perfect for that, clean and immediate, I wish there was an engine solution for that, something like makeWreck <vehicle> that would transform any vehicle into a wreck. Would be good to have some extra “LEGO” bricks, considering lack of official content in Arma 3. Anyway, the principle of the wreck making is to break, to fix and to break again. Call it a “hack” if you want, but I tested this in Arma 2 and it also works there. So, wreck making 101

The helicopter will just blow up and burn normally, so what you can do is add enableSimulation false to stop burning, but this will not stop explosion. Disabling simulation will make wreck immovable, which actually could be not bad. Leaving simulation on would give you a wreck that you can push with other vehicles. If the wreck needed as a map object/obstacle/cover, I would suggest creating vehicle for it with createVehicleLocal and then disabling simulation. This way it will be the same on all clients and will not need any network sync. I also suggest to add a little delay before simulation is disabled, if done too soon, the wreck may freeze in the air or not transform into a pretty looking wreck in full. 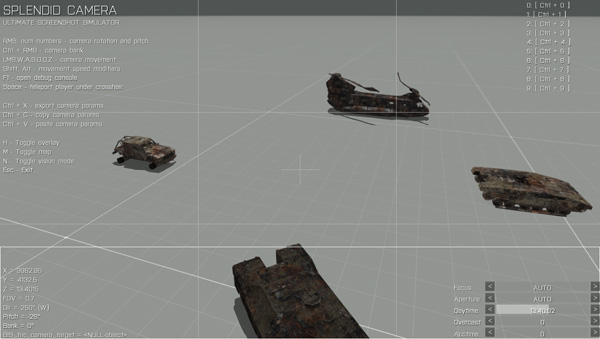 Thought it would be fun to write this in SQS (not without a reason):

And one other thing, again, because some effects scripts could be running, you might occasionally get fire damage when there isn’t fire. I know I know, also mega annoying, something that should be done in the engine is done with crouches… *cough* scripts. This could have been be OK if it did not create so many problems for those wanting to customise the game in their own vision.