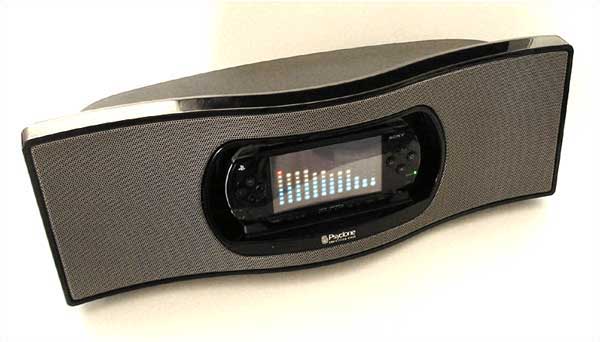 It works flawlessly when you listen to the content of your memory stick, however I found that as soon as you want to go on the Internet there could be a problem as PSP shuts itself down when trying to use Wi-Fi. The problem comes and goes on PSP with official firmware, but on PSP with custom firmware it is pretty much 100% failure.

The reason for this is that custom firmware PSPs usually run at 333 MHz where as default processor frequency is 222 MHz. This extra speed requires more power and combined with Wi-Fi that also requires extra power, it just overloads Nodus Psyclone.

But it is not the Nodus Psyclone that disconnects. When Wi-Fi kicks in, it produces surge of energy, which causes electric current fluctuation from the power supply that is connected to PSP and this causes PSP to shut down. I dunno if this is a design feature or protection feature of the PSP but it sure doesn’t complement Nodus Psyclone.

The solution is simple. Firstly you will need to open up Nodus Psyclone. To do this you will need to first remove the front metal grill. Pick it with something like a nail or anything that would fit into small holes on it. Be careful not to scratch the surface or the edges. Once removed you will see where the screws are. There are also 2 extra screws behind 2 rubber caps in where you sit the PSP. After you’ve opened it, find this wire:

It goes to 2 small pin contacts on the right where the PSP sits. Now you need to break some insulation on that wire and solder a capacitor to it like this: 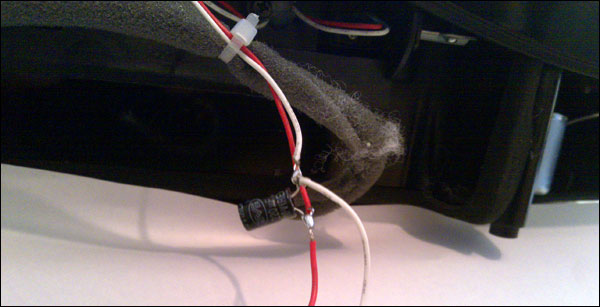 I used 220 mF, 10 V electrolytic capacitor, and it did the trick, but the bigger the better. The capacitor is supposed to combat the electric current fluctuation after switching Wi-Fi. Make sure that you connect the “minus” leg on the capacitor to the white wire and the other leg to the red wire. Then also make sure the connection is sound and put some cello-tape around the solder points to isolate them. Put it back together and you are done!

Few tips on energy consumption and PSP. When the power light on the PSP goes orange, this means the battery charges. If you dont use Wi-Fi, Nodus Psyclone would normally charge the PSP. However it will not always charge it on Wi-Fi connection. So what you need to do is select the power saving mode from system menu on XMB, this will turn down the output power, which could reduce the Wi-Fi range. Another thing you could do is to switch the display off by pressing and holding the small screen button. Sometimes it is enough to just dim it a bit. If however you leave your PSP on Wi-Fi connection with battery not charging, after a couple of hours the battery would drain and PSP would shut down and switch to charging mode. Anyway, feel free to experiment to find best setting that suits you.